Honoring "The Snake" on our Super Bowl Sunday

I’ve never been one to just throw some writing together but today I figure the pictures will speak louder than words.
Since neither of us have watched sports in over 10 years, Super Bowl Sunday is just another Sunday for us, but we have a celebration of a different kind.  Today we finished “dressing up” the inside of the greenhouse, up until today it was a “bloody muddy” mess!
We have dreaded going in to pick fresh greens because the mud was so deep we would lose our shoes. Though it was depressing to see, we have been enjoying lots of salads and we even had our first orange last week.  It was the best tasting orange either of us have had.

Yesterday we finished coating the shorter bed with Eco Wood Treatment and today it was filled with soil and compost awaiting for perhaps melons.  The rock was then brought in and what a difference it made.  As I was watering the bed the sweat was dripping from my brow and I noticed the thermometer read 90 degrees…no wonder the kale was looking wilty. 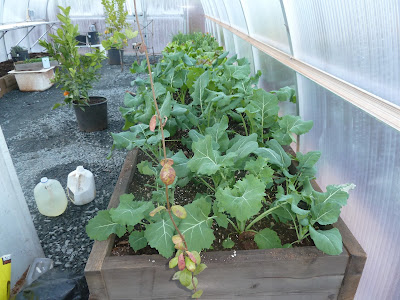 As I watered I also weeded and figured the weeds could be added to the worm bin which got moved back outside again, hopefully we won’t get any surprise freezes.

We’ve been enjoying the onions that we harvested last year and also the potatoes that we left in the ground along with the carrots.
Also very happy with the looks of the garlic so far,  should be a good crop...fingers crossed.
We'll wait and see what we get if anything from the cabbage.  It took a bit of a hit from a couple of hard freezes but I couldn't resist a picture of it as I think it's still beautiful.
Today was a joyous one for us in many ways but sad to think that we use to indulge in such a violent sport for entertainment.  Hearing the announcement this past week about Kenny Stabler having CTE (chronic traumatic encephalopathy) added to our sadness as we both enjoyed watching him over the years.  My husband followed him in college when he played for Alabama and later for the Raiders, but I didn’t start watching him until Bum Phillips was his coach for the Houston Oilers. I remember having a #12 put on a Houston Oilers tee shirt with the lettering of “The Snake” under it for a gift for my husband.  In 1974 he was recognized by the Associated Press as the MVP of the league and was also the AFC player of the year.  I didn’t know until reading recently that the pro wrestler (another sport we watched for entertainment) Jake, The Snake adopted the name as a tribute to Stabler.  So many of the athlete’s we watched for the fun of it have been diagnosed after death with CTE.

So we choose to celebrate Super Bowl Sunday as well as Kenny Stabler’s induction into the Hall Of Fame in a different way.  Today was full of sunshine while we worked enjoying the outdoors and this evening we’ll enjoy our homemade crackers (made with basil, dill and rosemary), a good porter while we play a game of billiards.

After we’ll sit down to a home cooked meal of Chimichangas made with a chuck roast raised on a farm here in Oregon, 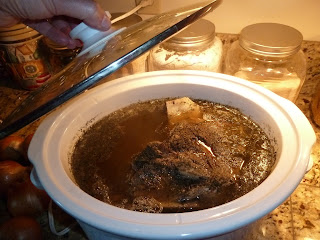 and tomorrow we’ll wake to toast made with our fresh sourdough bread, yum!

Posted by Gardengate at 6:15 PM No comments:

Gardengate
Homesteaders who live on acreage in the beautiful Pacific Northwest. We enjoy gardening, eating what we grow, observing nature and listening to good music while watching collapse in real time.