As darkness pushes the day into night I look out at the forest behind us and I’m thankful for a day of sharing and caring amongst family and friends.   I walk outside in the lightly falling mist to close the chicken coop and I count thirteen chickens and know that they all made it home safe. Walking back to the house I hear the water running hard now, meandering off the property to its destination below.
Over the last week, we’ve had over 7 inches of rain and I wonder when we’ll see the sun again.  I look down at the garden that was so alive a couple of months ago and now see only a few vegetables left in the ground.  A bed of Rainbow chard, celery and kale cover a small area where their colors stand out vibrantly waiting to be picked.  The ferns from the carrots still green remind me that they’re still there.  Instead of seeing a garden with no life now, I envision a weary soul who is resting for the next battle.
Thanksgiving means something more to me now that I understand what it is that I’m giving thanks to.  Every day I try to notice the beauty while being a part of the pain.  Today like all other days I’m thankful for learning how to love what’s important to me.
Our china, a wedding gift from Mom & Dad decorates our table as friends and family sit sharing food, some of which didn’t travel but a few feet.  I scrub some carrots for dinner and stare at the pumpkin pie waiting to be cut.  I watched as the pumpkin was cut this morning and once again I'm reminded how close our food supply is. 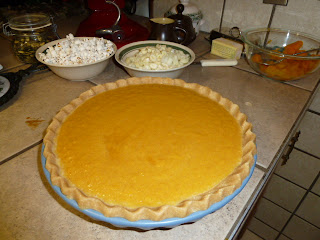 As many prepare for the mad rush of shopping days driving to the malls in oversize vehicles that wait to be filled with unnecessary items, we sit by the fire and contemplate the future as we begin to let go of the past year.
I often wonder about traditions now and hesitate at times to partake in something I know and understand little about.  History is often written by those who write and not by those who see.  I sit looking out the window anticipating what the season will bring.
Winter usually approaches slowly as fall puts fast to sleep all that needs rest.  Seasons come and go and I allow the changes that time creates.  I try to see things as they are and not what I expect them to be.   I don’t allow myself to hope for things that are not possible but instead rejoice in what is.  I enjoy spending holidays with those who are closest to me and understand the nature of things.  We reflect on time passed and lessons learned.  It’s a time to move forward and let go, a time to be.
Surrounded by warmth, I look out the window and see a changing landscape.  Leafless are the trees now that stand apart without green filling the spaces in between.  They stand naked in their glory as the energy that once was visible above the ground is now buried in the roots that support them.  In the garden, Clover wanders in between the beds and over them forming an endless green blanket fixing nitrogen levels for early spring plantings.  Fallen leaves are piled high on some beds providing green compost for the microbes below the soil.  I watch the stems of the sunflowers swaying back and forth as Blue Jays hang effortlessly eating the last of the seeds.  Spotted Towhees dance back and forth scratching the ground.
More days than one I give thanks for the bounty that nature provides us.  I look before I eat at the food that decorates my plate and I see where it’s been and appreciate how it got to my table.  During the seasons of life, I enjoy what each has to offer.
My shelves stacked high with books yet to read, now warm my lap as I sit next to a fire made of fallen wood from a forest nearby.  I spend time with fibers ready to spin wrapping loved ones in clothing that they wear close to their hearts.  I take this time out of the busy rush of the season to search for pictures to color the pages of this year’s garden journal and I fill in the missing links to the map of crop rotations.
Giving thanks makes me think of how different our lives would be if we didn’t have oil to depend on.  We think nothing of booking a flight to visit family we haven’t talked to all year.  I wonder how some would share their holidays if they only had those that lived near them to share it with.  People we may see throughout the year but never have the time to connect with.  Here at home, we take traveling fore granted as it’s always been available to us, but have we ever thought how different it would be if we didn’t have the ability to fly as we do.  Could we survive a holiday alone if we had to?  If not, why?
I’ve known some people over the years that are fine with the idea of staying home alone and not eating turkey for a holiday meal.  It’s only when others look at them strangely that makes them feel uncomfortable.  Sometimes traditions are made to be broken and new ones made in their place.  Who’s to say what moments in history should be celebrated, some of us celebrate waking up each morning and looking outside our window at what waits to be seen.
Posted by Gardengate at 5:21 PM No comments:

For the first time I passed the Occupy Eugene encampment yesterday and noticed a banner facing 6th street that read:
Never doubt that a small group
of thoughtful committed citizens
Can change the world.
Indeed it’s the only thing that ever has.
I proudly own a tee shirt with the saying from Margaret Mead and have always believed it to be true.  If not us, than whom?  Ever stop to wonder why we allow 1% to rule the rest of us?  Don't we all have a vested interest in changing “business as usual?”
As I drove past the camp, I looked around the site to see how it could grow.  The highway overpass intersects 6th street which is one of the main streets going through town.  Maybe a better name for the movement would be “taking it to the streets” since Wall Street isn’t the only street to occupy these days.  Every Main Street throughout the country should be occupied as more and more everyday people begin to scrutinize the actions of corporate America and the unethical behaviors we’ve allowed to go unnoticed.  Maybe we can borrow the loudspeakers that have been used for torture and play the Doobies over and over again while we take back the streets that are ours.
What angered me to write this is the fact that some of the 99% are driving around thinking it's not about them.  Guess what, you’re wrong!  It’s already affecting all of us, if not in the price we pay for food, it’s in the costs of healthcare.
This past week 37,000 retiree’s of Century Link, formerly Qwest Communications received our health care packages.  What is commonly referred to as “ Open Enrollment” has become more like open season for hunting and all is game, especially retiree’s whose only option is to decline the coverage.
Some of us have observed the changes that have taken place over the last several years such as pension plans being replaced by 401k plans, union employees being replaced by non union contractors and a lot less strikes as corporatism wins in the battlefields of the poor.  I heard from workers during the last contract dispute, “we can’t afford to strike”, while I stood firm to the fact that we can’t afford not to.
As I flipped through the pages of my health coverage, the high deductible was not the only thing that went up in costs.  Our monthly premium for my husband and I went from $64.77 to $345.70 in one year.  This is more than our monthly bills combined.  Never have we witnessed such an exorbitant increase in a monthly bill before.  What many of us have been saying for several years is starting to raise the eyebrows of some but not near enough.
Crossing age barriers as well as political boundaries the 99% had better wake to the fact that the American Dream has ended abruptly with a nightmare vision of what’s to come brought to you by the other 1% who control things.
When the local farmer answers to the high cost of feed by raising the costs that’s passed on to you, than it’s time for us all to examine the way we live and how we can help each other instead of making the rich richer.  Recognizing that we’re all in the same boat drowning in the torrential downpour from the upper echelons is probably a good thing and perhaps we’ll all be occupying the streets that we own before long under one big umbrella.
I’ve received emails from union officials telling me to hold on tight while they check into things as well as other retiree’s who tell me they’re not so concerned as they have Medicare to stop them from drowning, and lets not forget to “thank Gawd for Social Security”.
Many of these retiree’s are Telephone Pioneers who depend on antiquated systems that may no longer be safe.  This doesn’t have to mean that our pioneering days are over and as for some of us they’re just beginning.  Maybe we all need to be reminded of what a pioneer is.  I tried to put all the definitions together and this is what I came up with this:
Person or group that creates or develops a new way of doing something for the first time.  Someone who like a foot soldier goes ahead to explore uncharted and unclaimed territory so they can begin to live in what once was unoccupied space.
Metaphorically speaking this may mean that we pioneers should be looking for territory yet to be discovered, living like we’ve never lived before--- simply, forgoing a life that promises riches when the only one that's getting rich is the 1%.
We watch as public servants go through revolving doors of the public sector to the private sector and back again while rewriting laws to their advantage and watching their paychecks increase astronomically.  Haven't we had enough?
Good morning America, can you smell the coffee?  It’s been brewing for some time and it may be a little burnt tasting for some.  Soon we’ll all be without our daily fix of entitlements and maybe then we the 99% can begin to let go of what we think is ours and help by voicing our concerns to those who may be listening.  The platform is there for all of us to tell our stories and share our experiences.  It’s not just about Joe the plumber, it never has been, it’s about all of us, we the 99%.
Posted by Gardengate at 5:54 PM No comments:

Gardengate
Homesteaders who live on acreage in the beautiful Pacific Northwest. We enjoy gardening, eating what we grow, observing nature and listening to good music while watching collapse in real time.